OK, as an organizer of the event, I am probably not the most neutral party; however, I do think the we managed to pull of a great BarCamp here in Portland. First of all, a huge thank you to Eva, David, and the rest of the crew at CubeSpace who generously gave us the run of the facility, were an amazing help, let us stay until 11pm both nights, and were extremely flexible when the registrations soared out of control the 3 days leading up to the event from our expected attendance of 125 to a final count of about 250 attendees. Also a huge thank you to Raven Zachary, co-organizer and partner in crime for the event, and the rest of the planning team: Carl Johnson, LaVonne Reimer, Audrey Eschright, Patrick Sullivan, Sioux Fleming, Kelly Mackin, and Rashid Ahmed. Each person on this list was a tremendous help. Todd was also an enormous help: staying up late to help draw the grid; bringing me bubble tea; getting last minute materials cut at Kinkos, putting up with my crap as my grouchiness escalated during final preparations, and much more.

During the initial planning of BarCamp Portland, we thought that would be really cool if we could get maybe 75-100 people at Portland’s first BarCamp. As people began signing up, we thought that 125 was a pretty realistic number (this is what we budgeted for). A week or two before the event, we had 125-150 people signed up, and we felt really good about that number. As we moved closer to the Friday start of BarCamp, the numbers escalated rapidly to 274. Based on signups at the registration desks, we think we had about 250 people physically present at the event. Our sponsors were very generous in making last minute increases in sponsorship funding to provide additional food for the extra people.

I was lucky enough to get to play with a real OLPC last night at the BarCamp Portland Meetup. I was surprised by how durable it looked. The keyboard looked like you could dump an entire drink on it without any adverse consequences; however, we refrained from testing it!

A few people commented that these would be great for kids … regardless of whether they are located in an emerging economy. In places like the US, Europe and other areas, we might be willing to pay a little more to have a durable laptop for the under 8 years old crowd. This might help subsidize the costs and make it easier to provide an OLPC to more children around the world. In addition to providing a stable revenue stream among customers willing to pay a little more knowing that profits were going to a good cause, opening these up for sale to others would increase the volume enough to help reduce the production costs. I’ve heard that they are having a hard time making these for less than $100, and additional volume might help.

Thanks again to Alex for bringing it and generously letting us play with his toys! 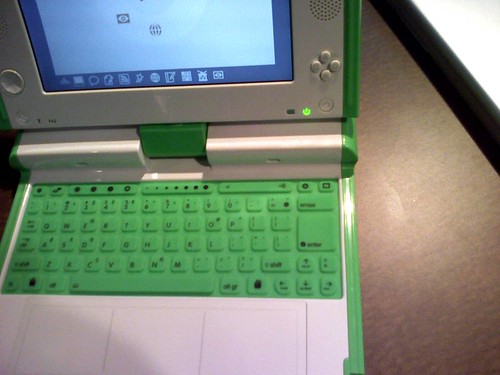 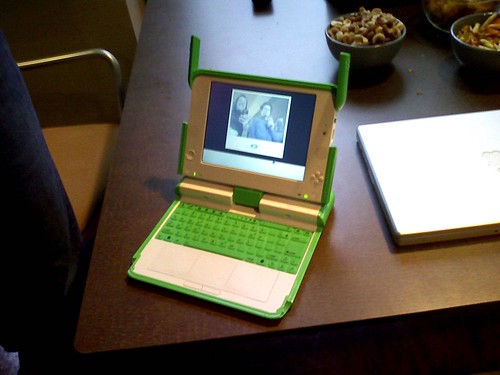 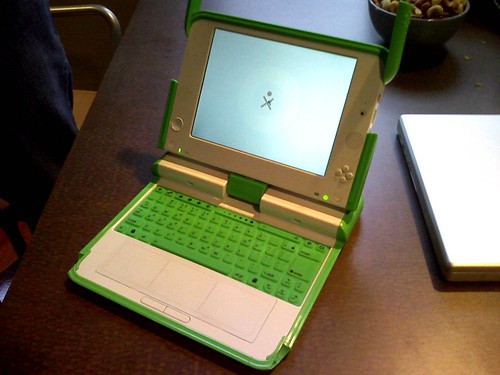