Our sxsw podcast from March: Non-Developers to Open Source Acolytes: Tell Me Why I Care was just released as a podcast.

Open source and standards are like religion to some in tech, but many non-developer technology consumers wonder: why should we care? Check out this debate between open source advocates and devil’s advocate, figure out if you care.

I highly recommend reading “She’s Such a Geek” edited by Annalee Newitz and Charlie Anders. Annalee and I were on a panel at sxsw, and I picked up a copy of the book during her book signing at the event. The book contains a series of essays written by various woman geeks of all types (science geeks, computer geeks, gaming geeks, and more). Even though I was already reading another book, I decided to read one of the essays while I was waiting for my plane home from Austin. I kept reading until I finished the ENTIRE book (granted, I had several delays making the trip from Austin to Portland a little longer than normal, but I could not put the damn book down!)

I do not typically read books “for women” or “about women”. Why? I am not entirely sure. Maybe it is my way of rebelling against stereotypical gender expectations. As a child, I was a tomboy more comfortable playing with snakes, salamanders, and frogs than with Barbie Dolls. Today I work in technology, blog for fun, and watch BSG religiously. Maybe I try so hard to resist gender stereotypes that I go too far in the other direction avoiding anything that looks feminine. This may just inspire me to write my own geeky girl essay.

I agree with Katie Hafner, Technology Writer for The New York Times, quoted on the back of the book: “These personal essays are exhilirating, hilarious, inspiring, and infuriating. Anyone with a daughter should read this book. Then make sure she applies to M.I.T.”

This morning, I was lucky enough to be on the “Non-Developers to Open Source Acolytes: Tell Me Why I Care” panel with Annalee Newitz, Erica Rios, and Elisa Camahort organized by BlogHer. We had quite a few people attending, and some great questions and lively participation from the audience; one comment from Erica even drove the audience into spontaneous applause!

I love doing panel sessions, and this one was a lot of fun. Liz Henry was even kind enough to post a great play by play, live-blogging style post for the session, so I will skip the detailed summary here and point you to Liz’s detailed notes.

Kimberly Blessing even called this the “Best SXSW Panel Ever” … cool!

Update 3/14: A few additional reviews of the panel at InformationWeek, Techory.com, BlogHer, On Women and Technology, and probably others I missed. 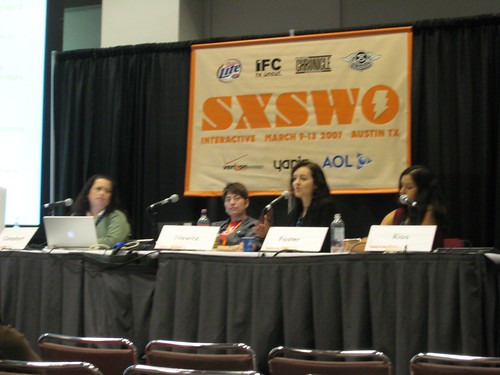 Picture is also courtesy of Liz Henry – thanks, Liz!