Ross Mayfield describes the Power Law of Participation as patterns that “have emerged where low threshold participation amounts to collective intelligence and high engagement provides a different form of collaborative intelligence” (Mayfield). Within this model, a large number of users of social websites will not have a high level of engagement thus taking advantage of the value with few contributions back to the community while other users will contribute most of the content. This generates two very different forms of intelligence, collective and collaborative, which co-exist together to form the essence of a community. 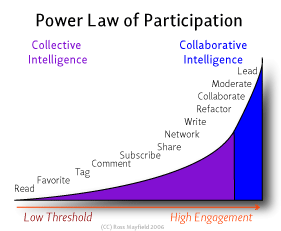 This reminded me of a number of studies on open source that support this idea. For example, a case study of the Apache project published in 2000 found that 80% to 90% of the submissions came from a set of 15 core developers in a community of more than 3000 people. A study of the GNOME project had similar results with 11 people contributing most of the output. Relating this back to the Power Law of Participation, the small number of core community members leads to collaborative intelligence, while the larger community provides an important collective intelligence by contributing bug reports, ideas, and comments. These two types of contributors and the resulting intelligence generated both feed off of each other and allow the community to prosper. I would be interested to see how this applies to other communities.